Overview: Research tells us that one of the secrets to building a resilient organisation  is to understand and interpret weak signals better than the competition. Weak signals can help us prepare for future shocks. If we look at recent developments, particularly in the Ukraine and the Middle East, there are enough ‘weak signals’ that indicate the next step in the globalisation process might just be regionalisation. This briefing presents a framework that helps you to explore what a regionalised world might look like and what the implications could be for your organisation.

Introduction
If the business mantra of the past two decades has been ‘growth, growth, growth’, then the mantra of the coming decades could well be ‘resilience, resilience, resilience’.
Why?
The answer is that certainty in the business world seems to be evaporating. As 2014 opens, new doubts appear in front of us. For example, there are now real question marks over the stability of the ‘BRICs’ – the four emerging markets whose growth and global dominance were billed as a sure-fire certainty just two years ago[1]. Even technology, once the paragon of positive change and growth, could well reveal a more difficult face as the destroyer of jobs[2] and a catalyst for further inequality and turmoil.
And on top of this we seem to be having a regional struggle for influence in the Ukraine.

So, faced with such uncertainty, what should we do?

Research tells us that in uncertain and ambiguous times we have to be really good, as organisations, in picking up and interpreting weak signals[3]. But this research also informs us that we have to expand our mind-sets to innovatively interpret weak signals. If we don’t expand our mind-sets, then we risk missing an early warning signal. The problem is that we are all busy. Probably too busy. The product of a crammed agenda is that we tend to shoe-horn our interpretation of the world – and weak signals – into a single familiar model. And that model, I would suggest, is the one that tells us that economic globalisation – the development of one open market –  is an unstoppable force. The challenge therefore is to find alternative models that will help us develop multiple mind-sets so that we are not taken by surprise.

Towards an alternative mind-set
There are enough weak signals around that tell us that economic globalisation – the creation of one free global market place – might be severely off-course and that we could be headed towards a world characterised not by globalisation, but by regionalisation. If we look back over the last few weeks, the signals are all around us. Whilst we have had some success at the World Trade Organization talks in Bali[4], real progress remains debatable, some saying that the outcome adds up to ‘very little’[5]. Others point towards a trend to regional trade negotiations[6] and on that note, the man nominated by Forbes Magazine as the world’s most powerful figure[7], Vladimir Putin, believes that regionalisation is more reliable than globalisation[8]. This brings us to the rise of the Eurasian Union and the battle of money, influence and minds over the Ukraine. And all this is taking place as the sun starts to set on the dominant role of the US as the world’s global architect.

So we are faced with the possibility that regionalisation might be the next step in the globalisation process. All this just might make sense too in a world that faces the prospect of unprecedented resource challenges, especially in the areas of water and food[9].

This leads us to the question – how can we see what a regionalised world might look like? Well, we can catch a glimpse of the form of a world of regions if we look at the Great Recession’s two biggest casualties – faith in the Washington Consensus and the legitimacy of national leaders. By the Washington Consensus, I am referring to the formula for economic growth and stability originally put forward in 1989 that embraced fiscal discipline, reducing the size of the state, trade liberalisation, privatisation, deregulation and, by inference, democracy[10].  The real problem is that this formula now faces a crisis of credibility in the eyes of many [11],[12],[13] and that a future of stagnation beckons[14].

The issue of the perceived legitimacy of national leaders is one that has concerned me for some time. It has now risen to such a level as to be selected as a major research area by the World Economic Forum in 2014[15]. The question of the ‘legitimacy deficit’ is one that runs from the US, through Europe, to the Middle East to Asia. In short, technology has brought greater accountability and at the same time, globalisation, at its current stage of development, restricts leaders’ options and room for manoeuvre.

But we can use these two major concerns to develop an alternative way of viewing weak signals that might just shed valuable light on globalisation’s next steps in its potentially twisted path. If we express support for the Washington Consensus and the leadership legitimacy as two continua we can construct a simple two-by-two matrix that could represent a future world of regions: 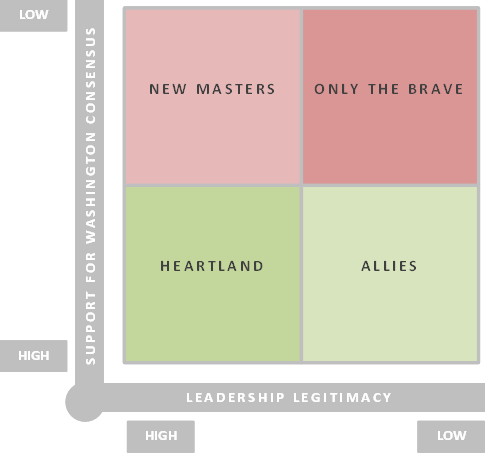 As we can see, this produces four broad zones and we have to think of current and future markets in terms of these zones, each of which has its very own strategic implications.

Heartland is the most familiar. Support for free-market capitalism, with safeguards, remains high as does satisfaction with political leadership. This is very much the type of place most of us plan for. Growth rates remain relatively high and capitalism and consumerism remain as key pillars of society. It’s a place too to explore demand for the latest products. But it’s only one of four regions. Allies might superficially look the same as Heartland but it isn’t. Whilst capitalism remains as a major force, it has to work in a very different environment and pay deference to new unwritten rules. Whilst capitalism remains highly influential, Allies is a more fractious environment where growth levels and employment prospects are lower. This is not a world of materialism as the Heartland is. It’s a world where, as Harvard’s John Quelch has proposed, relationships and experiences are far more important than the latest product[16]. The key to survival in this sector could well be how well businesses reposition their offerings as either ‘essential purchases’ or ‘treats’[17]. But there are other rules to be aware of. Traditional approaches to boosting the bottom line (such as aggressive cost cutting and offshoring) may be socially unacceptable.

If we cast our eyes up to the top left quadrant, New Masters, our thoughts immediately turn to state capitalism. We can define state capitalism simply as ‘capitalism under the strong rule of the state’. In other words, the interests of the state, not the global marketplace, will always come first. I talk about this as ‘security globalisation’[18] – the allure not of material wealth – but the provision of security in a fractious world. The important point is that shareholder value creation comes in a distant second to the demands of the state. The above observation regarding the acceptability of aggressive cost-cutting and offshoring apply here too.  The problem that we face is that authoritarianism is on the increase[19] so we have to give this quadrant serious attention. As Ian Bremmer states, the key to working countries dominated by state capitalism, is to define the perceived strategic importance of your businesses products and services[20]. But it’s not just state capitalism that you have to worry about. If we look at what is happening in the Middle East, a new dominant force could be appearing and that is the role of religion. The really important point is that in this quadrant the business world’s power will be very much second-best.

Finally, the name in the last quadrant says it all, it is only for the brave. We can think of this area as a society without any supporting pillars and it is a space that could well increase in size as the UN’s doctrine of the responsibility to protect is redefined and loses its major sponsor, the US.

The interesting part is plotting where your current and planned markets are both now, and could be in 10 years’ time. When we do this we have to be more than a little careful about national borders. As I explained in my briefing Globalisation: time for a rethink, the scene is set for some surprising changes.

There are some online resources that can help you to start the process of plotting your markets. Try Freedom House and Heritage’s 2014 Index of Economic Freedom. You may also find the Pew Research Center’s Global Attitudes Project worth reflecting upon.

When you have finished your work the results will surprise you.