Skip to content
Home » 2015 Theme » Looking at the Future: the critical mistakes to avoid

This paper and the associated scenarios were originally presented at The Emerging Markets HR Summit 12th November 2015 London, organised by BOC Global Events and Training Group

It is a sad fact that many organizations might not be very good at looking at the future.  Obviously, this shortcoming can leave leadership teams and their organizations badly exposed when the unexpected breaks to the surface.

In this paper ideas are shared on how to look at the future and what it may hold from a different perspective. I will also share with you some of the issues that I have been researching over the past eight years.  The objective is to provide a simple framework that you might wish to take away and consider. This could include the implications for your organization’s strategy, core competences and learning and development planning.

This paper will address these questions:

Why do organizations find it so difficult to think about the future?

Well, the figures are not good. Research[1] indicates that around 80% of organizations would like a better way of picking up the weak signals that may indicate that frame-breaking change is on the horizon. Well over 90% are probably worried about their early warning systems and over 60% may well admit to have being shocked by up to three high impact unexpected events over a five year period.

And there are many stories that we can use to substantiate these findings. In early 2009, academics and researchers in London invited the Queen to a presentation to explain how the Credit Crunch occurred[2].  A comprehensive explanatory presentation was provided, but the Queen asked a simple question – ‘How come nobody could foresee it?’ The response, three weeks later in the form of a letter, pointed towards a ‘failure of the collective imagination of many bright people ….’ But the letter contains many other clues that we can build upon to understand why organizations find it difficult to think about the future:

We all have a significant role to play in overcoming these obstacles. This is a critical task that will help us to look at the future using a different approach and such an approach may well lead us towards tomorrow’s sources of competitive advantage.

Should we look at the future in a different way?

Let us start by taking a conventional way of looking out to the future. The ‘five certainties’ (please see Illustration 1) that are commonly accepted as driving the shape of our future world are as follows:

So these are the apparent forces, the apparent certainties that will shape our future and now form the foundations of so many businesses’ strategies.

We can see why this happens. These are largely benign forces. They are easy to project. When fused together they can be used to shape a very friendly and welcoming world, one that is a simple, a rational straight line from where we are today. 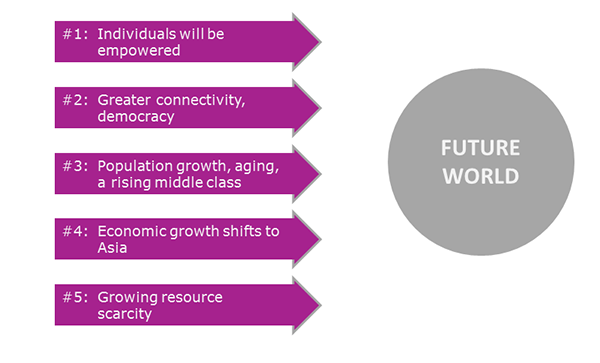 But this is immediately where critical mistakes numbers one and two enter the frame. The first rule of thinking about the future is never to assume that it will unfold in an economically rational manner. If it did, then we would never have wars or recessions. The second critical mistake is not to consider the disruptors. This is a common failing and we need to think very strongly about the impact of the disruptors. Why? Because most of the disruptors that are introduced here are very nearly a certainty – each one might be only a hair’s breadth away – some could quite well already be with us.

These are some of the major disruptors based on my research (please see Illustration 2): 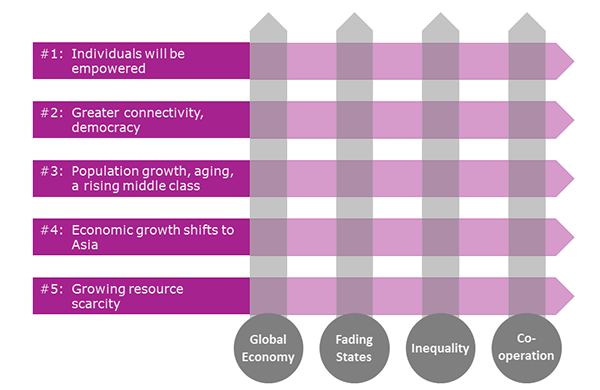 So what potential futures do we face?

All very interesting, but does this mean for the future?

A justifiable question, but one that has no precise, direct answer. The cold hard reality is that on one knows with great confidence what the future will hold – even just 12 months out from now. The world as it stands at the moment is very much a half-built prototype structure, but one that is highly interconnected, so much so that it is difficult to predict any outcomes. So rather than take a traditional approach and focus upon one forecast, one future picture or set of trends it is better to try to look at a range of possible futures that together could give us a clearer and more holistic view of the way ahead.

If we reflect back to the disruptors that I introduced earlier, we can gather them into two broad families. The first is a continuum of global growth running from stagnation through to renewed continuous and sustainable growth. The second family, again shown as a continuum, relates to global cohesion, in other words do we or don’t we break out of global gridlock.  Together, we have four potential future scenarios (please see Illustration 3 overleaf).

Now the trick to using scenarios is to focus on the general ‘flavour’ or ‘atmosphere’ that each conveys not so much the illustrative events that will be used to tell the story for each scenario.

Each of the four future pictures or scenarios has at least one ‘twist’ that should cause us to stop and think and, interestingly, only in one of these scenarios do a majority of the supposed certainties really hold true.

The first is ‘From dreams to a new reality’ and is the most optimistic, in conventional terms, of all four scenarios. This is a united world where old and new power houses are driven to cooperate by the threat of rising terrorism. Global institutions are reformed and the spirit of cooperation drives a return to sustainable growth. The twist in this scenario is that we do not see a return to free market capitalism. Recently, I attended a think tank discussion group meeting on the future of capitalism and it was suggested that we might see a shift to more regulated capitalism with an emphasis upon eradicating inequality and satisfying a broader range of stakeholders – all of course with the aim of ensuring social stability. This is the central message of our first scenario – an end of short-termism and the over-arching focus just on shareholder value creation. 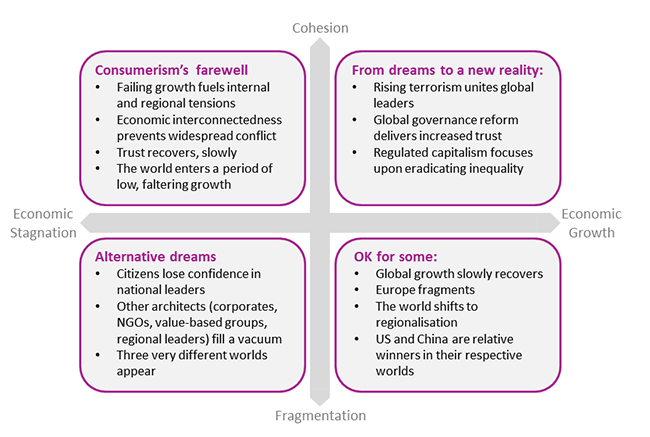 The title of the second scenario, ‘OK for some’, really says it all. We do not get to the level of cohesion that we saw in the last scenario and the West is burdened by very low levels of economic growth. Slower growth, a return to contraction for some, coupled with border disputes, a surprise ‘Brexit’ and migration pressures cause Europe to fragment. The world falls into two distinct zones, a contracting zone influenced by the US and an expanding zone influenced by China. Whilst this is a lower growth world with divisions, the relative winners are the new economies.  Some ‘old empires’, notably Europe, find themselves torn between these two zones and old allegiances fade.

‘Consumerism’s farewell’ carries a very different message and deals with the spectre of a low growth world driven primarily through hysteresis in the West that leads to a loss of global confidence. As we have seen, hysteresis relates to the delayed or long-term effect on consumer behaviour, of recessions. During a recession and a slow lingering recovery, consumer behaviour changes. Consumers get used to living with less and therefore demand less. Inequality becomes a major issue. Displays of material wealth are shunned. Luxury brands become distinctly less fashionable.  So this scenario is all about the changing face of consumerism and the real challenge of succeeding in a low growth world.

And so we come to the final scenario this may be the most interesting of all although it is the most distant from where we are now. I spent a year researching for my book[7] and the big conclusion that I reached was that there is not one universal form of globalisation but three. We all tend to think of economic globalisation as the big driving force for unification in the world, but there are two more that can come to the fore when times get tougher. The first of these forms of globalisation is ‘security globalisation’, or in other words the rise of authoritarianism that promises security in a volatile world. The final form of globalisation or attraction point is called value-based globalisation. This of course embraces religion but our minds should not stop there but should focus upon the rise of social movements that believe that established national leaders and other institutional bodies such as central banks have run out of ideas and have no legitimacy. This is a world of rapidly changing borders and a world that falls into three over-lapping zones, each driven by a different type of globalisation.

So what do we do?

All very interesting, but what do we do? Do we sit back and hope that everything will be alright and that the five certainties will hold good?

There appears to be too much risk in taking that approach.

For as long as we can all probably remember, the world of business has been driven by one word and that word has been growth. There is now another word that we should place alongside growth at the top of the business agenda and that word is resilience.

So how can we go from here to start to build resilience in our organizations?

We can start by taking three steps, built upon the content of this paper.

The first step is not to rely on the five popular certainties. Each of the popular ‘certainties’ must be questioned. If we look across the four scenarios that have presented only two certainties hold in each – rising population and resource scarcity.

Secondly, when planning, we need to pay as much attention to disruptors we do to certainties.

Thirdly, we need to think strongly about each of the four scenarios we have introduced here. A good starting point is to think about that top left scenario that deals with faltering growth and the prospect of another economic crisis (‘Consumerism’s farewell’). Thinking about how we can succeed in such a world now avoids or mitigates the implementation of all the usual crisis measures – headcount freezes, slashing the training and development budget, cutting sales and marketing investment – a process that we could refer to as ‘shooting all the usual suspects’! But most importantly, it starts a process of thinking outside the standard strategic box.

Critically, it is far easier to objectively answer the ‘what would we do if?’ question in the relative calm before the reality of a new world hits us.

And just one final point to close to bring us back to thinking about the future — please do not assume that the future will unfold in an economically-driven rational manner. It rarely does.

Please do sign up for my email newsletter to get my thoughts and ideas regularly.